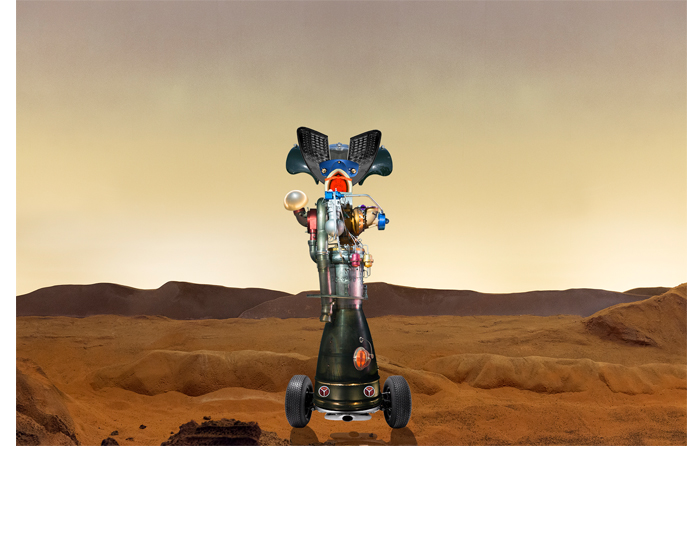 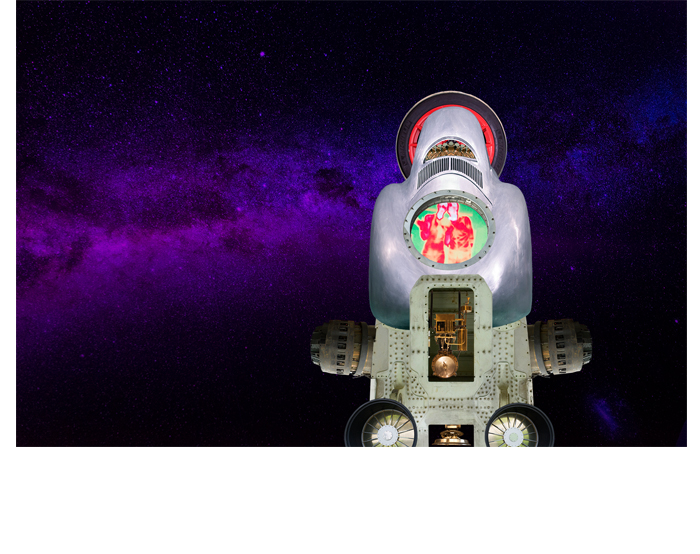 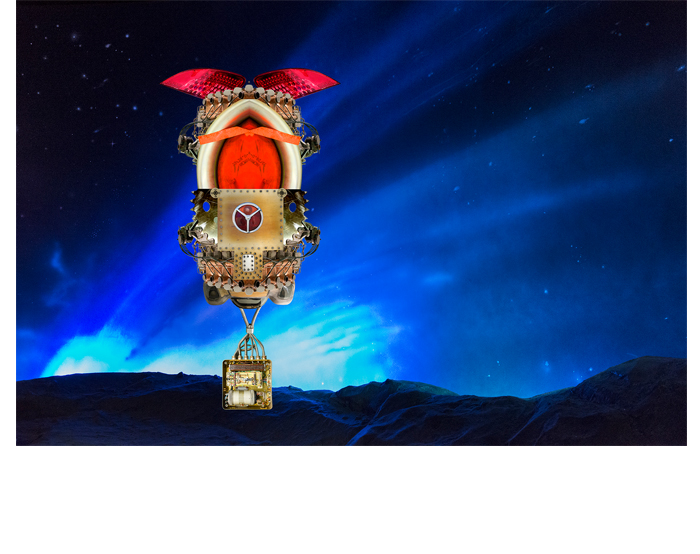 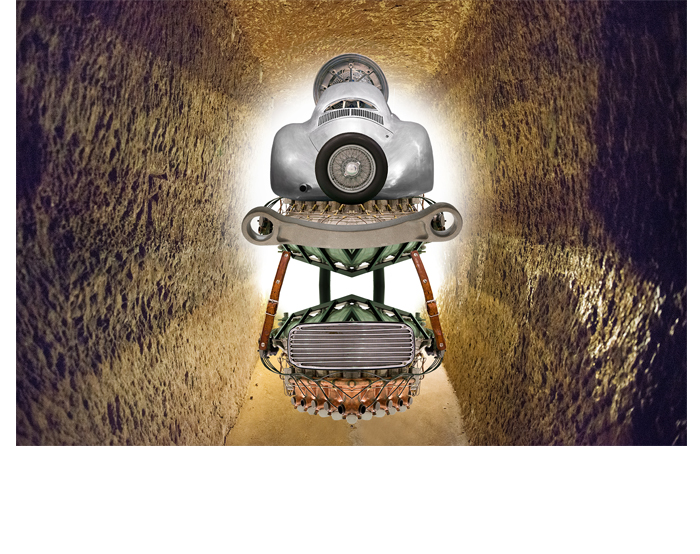 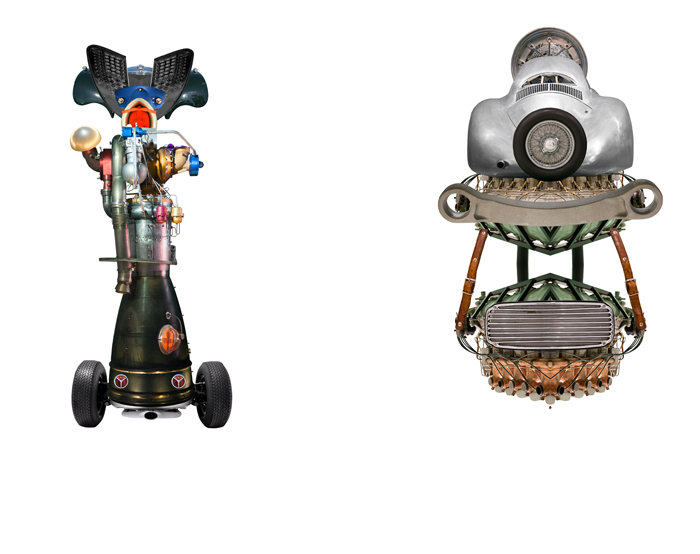 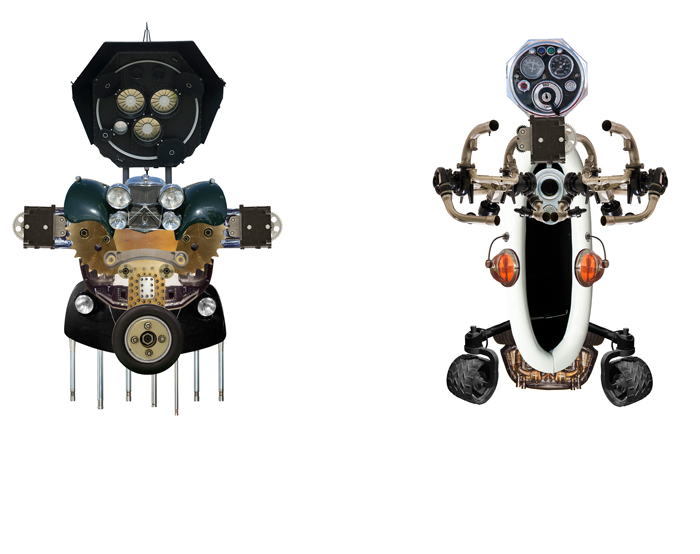 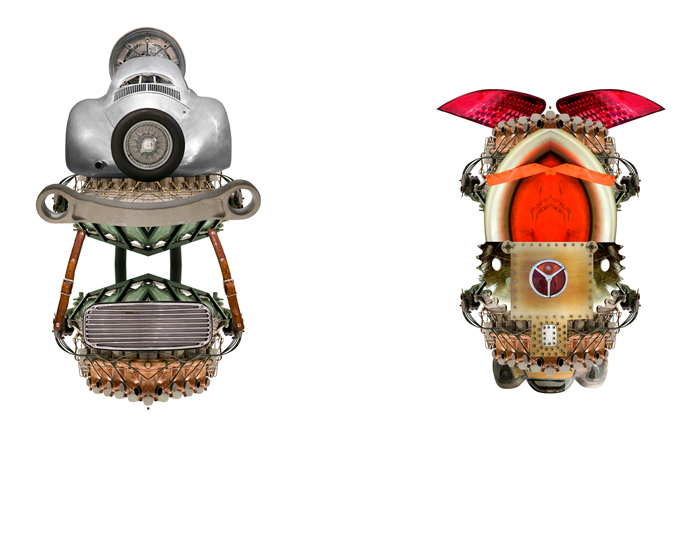 English: This digital collage series consists of images of non-functioning, self-invented fantasy machines. The collages are composed of self-photographed cars and car parts, combustion engines, rocket engines and gas turbines. They are photographed partly floating for a white background and partly in simulated universe-like spaces where they seem to feel at home.

They can be considered as relics from a passed age. Examples of outdated techniques. Techniques that once helped the Western world and provided more prosperity in certain parts of the world during and after the second industrial revolution. Once they were useful, but started to work against us and appeared to be polluting and destroy our world. For the benefit of and thanks to the development of these techniques many people have had to suffer. Moreover, we now have polluted air, earth and water and a lot of sick people.

These fantasy machines have recognizable human features and seem to be our friends at first sight. This humanization can also be seen in the design of robots. The idea behind this could be that people in this way accept the new techniques faster and integrate into their daily lives because they radiate something recognizable and friendly. However, they are wolves in sheep’s clothing.

The third industrial revolution in the form of global digitization is now behind us and a follow-up is in the making. This involves the integration and linking of computers and devices with the internet and the implementation of artificial intelligence in our daily lives. At this moment the old-fashioned internal combustion engine is going to be thrown out and step by step being replaced by the cleaner electric engines. Besides that, we are are transferring our energy sources from fossil energy to wind and solar energy. This revolution takes place at the cost of many things. Progress? One polluting and destructive technique makes way for the other and we have reached the point that we can hardly do without.

The term ‘Friendly Fire’ in the title refers to accidentally made victims among own people during war. A ‘False Friend’ is the mixing up of words from different languages, that seem to have the same meaning if you translate them literally,  but mean something totally different. This creates confusion and miscommunication and in some cases casualties.