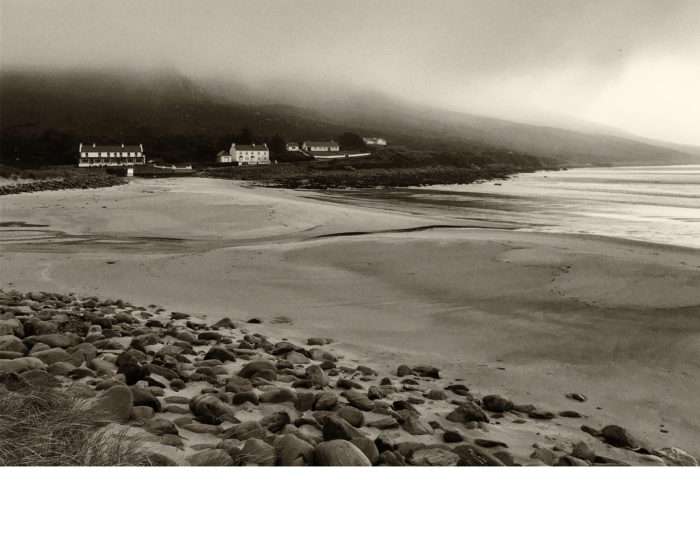 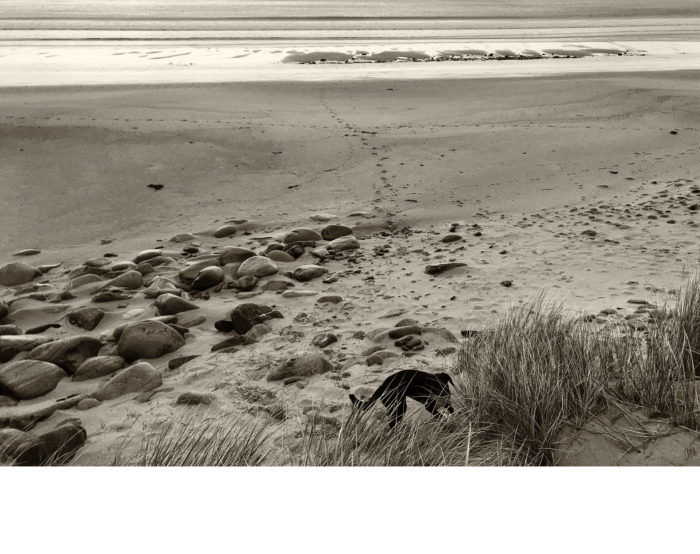 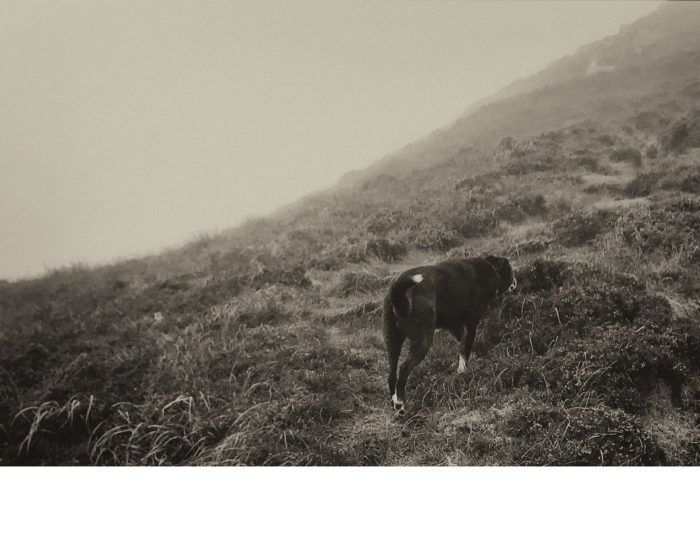 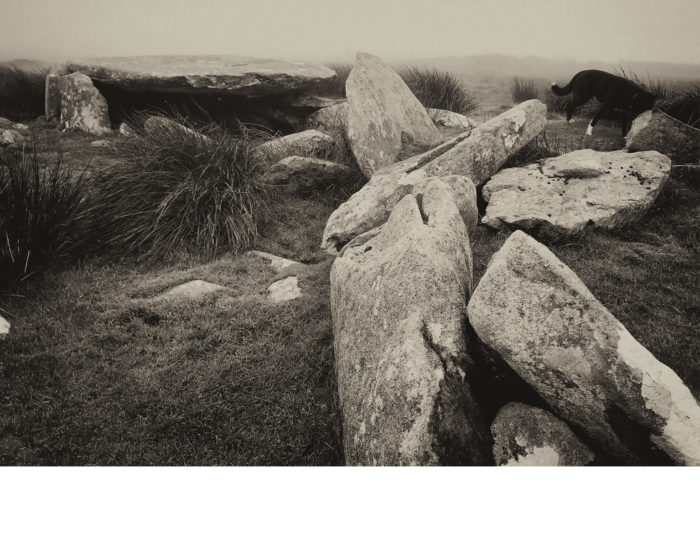 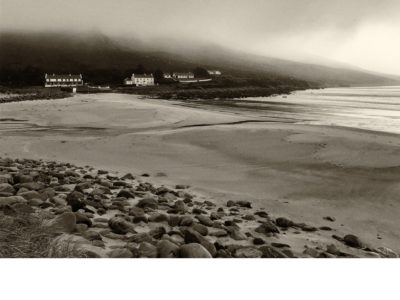 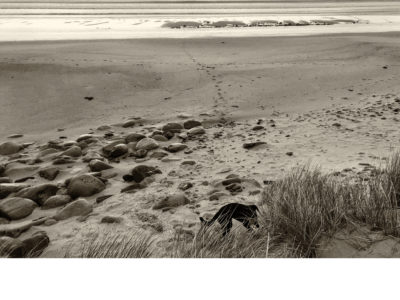 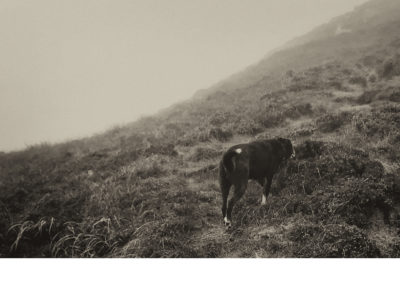 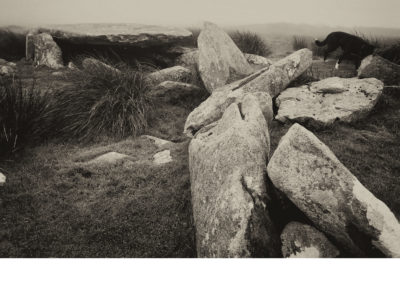 Bogland: A dog in the bog

We hadn’t even start the walk yet and suddenly a dog was standing in front of us. There was no one to be seen and the parking lot on which we just parked the car was also completely deserted. Two Dixies were standing in between the parking lot and the beach, one of them had been blown over. Besides that, it was so foggy that we could hardly see the mountain we were going to climb. According to the route description, the starting point of the walk would be a bay with holiday homes. We did see a few abandoned houses, but the holiday atmosphere was completely absent. In fact, I had an uncanny feeling about this place from the start.

Nevertheless we put on our walking shoes and gaiters with a good spirit and I quickly went to pee on the Dixie that was still upright. The wind even blew into the Dixie and there was beach sand everywhere. Just when we wanted to walk onto the beach to start the walk, a young dog came running out of nowhere. He wanted to play. After my accompany had thrown a few times with a stick he had found on the beach, to answer the dog’s invitation, we thought it was time to walk on. It was nice to encounter a young dog who wanted to play in a place like this.

Suddenly there was another dog. A black, much larger, male one. He chased the little dog away and it packed. The black dog started running around and barked at us. At first it was not clear to me whether he also wanted to play or if he was planning something else. He also wanted to play. Everything was fine. We continued walking from the beach towards the misty mountain and the dog followed us. I had the impression that he asked us in a kind of “dog way” if we were okay with him walking with us. I still thought “he will be gone soon” …

The first part of the walk (actually the entire further walk) was very wet and we immediately had to climb. The dog was still there. In fact, he ran around us very enthusiastically and seemed to be very happy to have found some new friends. Whenever he nearly got out of sight, he came running back to let us know he was still there.

It remained very foggy and we soon couldn’t see the point anymore where we started the walk. The mountainside became slippery and the parts where I had to put my feet on to get up, too. It felt like climbing a slippery and steep staircase with very high steps that you couldn’t see the end of. At the point we had made some progress and moved on a little bit, and I thought to see the top, a new piece of mountain came. According to the route description, we had to be careful not to walk too far to the edge, where it was too steep and very windy. Dangerous. We risked being blown off the mountain. Because of the fog it was very difficult to see where it was still safe and where it wasn’t.

At one point I literally got nodding knees. I also had muscle pain from those huge steps that I had to take to get up and started to slip more and more. We progressed even more slowly. The wind blew stronger as we got higher and the fog turned into some kind of drizzling rain.

We also came across large pieces, sometimes slippery stone, that we either had to crawl over or maneuver around, which was a real challenge because of the steep angle in which they lay. At one point I completely lost my sense of orientation and panicked. But that strange, but also sweet dog brought exactly what I apparently needed that moment. A little “Leichtigkeit”.

It was no longer responsible for us to slog further up so we turned around. If it were up to me alone, we probably would have gone back earlier or not even started the walk. Turning around was easier said than done. Also in the other direction, down, we had to be very careful and stay focused.

Suddenly the dog started to bark very loud. He had run a little bit ahead and initially we couldn’t see him. When we finally got him in sight, he was barking at a sheep that was struggling on his back to get up, which didn’t work. At first it looked like the dog had chased the sheep, so it might have slipped and fell. We had seen him do this before with some other sheep, during the walk and I suspected this was his kind of  playing. This time it looked like the sheep was injured and I immediately thought, “shit, how are we going to get it up.” As we came closer, the sheep luckily jumped up by itself and hurtled away.

Once we came down, I was very happy that we turned around. The walk was originally intended as a circular route, not as a “back and forth trip” as we made out of it. Along the route there were gravestones from the Neolithic era (from 11,000 BC to the Bronze Age). Of course we would miss these now. We decided to walk to the gravestones from the starting point via the actual way back. The dog stayed with us and happily walked along again.

The road to the gravestones ran along an ordinary narrow paved road where some cars passed occasionally. Every time a car almost overtook us, the dog walked right in front of it. He wouldn’t listen when we called him back. The drivers looked at us and might wondered why we didn’t keep a closer eye on ‘our’ dog. To get to the actual monument, we finally had to climb a very muddy slope and once we arrived it was a really sad appearance. The stones seemed to have slipped out of place and the sense of serenity I thought I would be experiencing was nowhere to be found. There was no trace of any sense of feeling, and the only thought that came up into my mind was, let’s turn around again.

On the way back we asked ourselves how to get rid of the dog. We had become friends and we were afraid that he might want to jump in our car to come with us. It would be a bit sad to slam the door before his nose and just drive away. Of course it was clear that we were not going to take him. We were not yet sure how we were going to deal with the situation, when suddenly a small car, just not quite with squeaky brakes, stopped and a grumbling women threw open the door. She yelled at the dog to jump into the car quickly and so he did. She apologized to us and hoped the dog hadn’t been a nuisance. It was her daughter’s dog and they had been looking for him all day. The woman took off with the dog watching us from behind the rear window of the car. 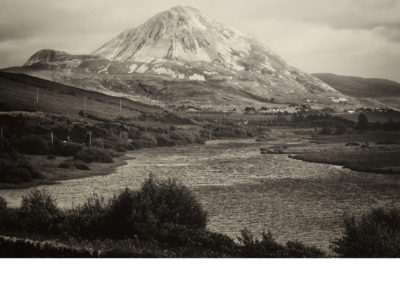 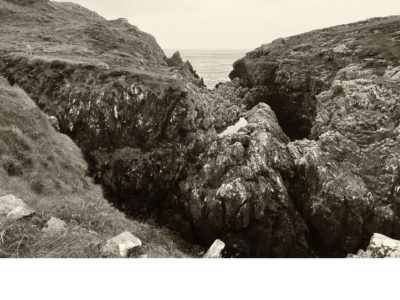 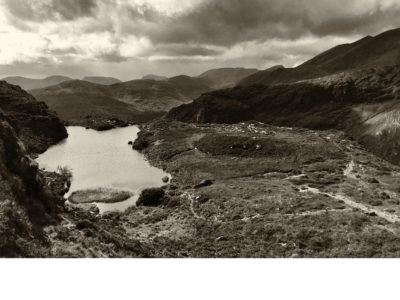 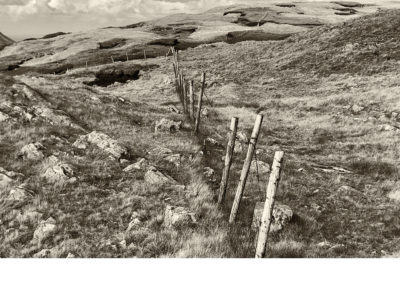 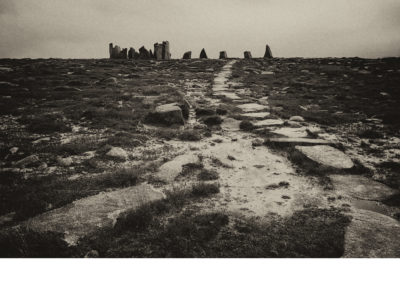 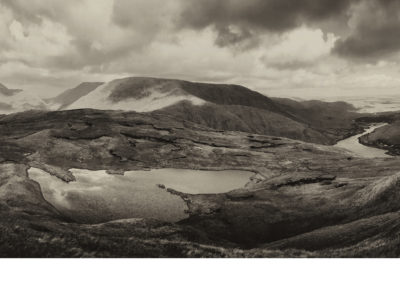 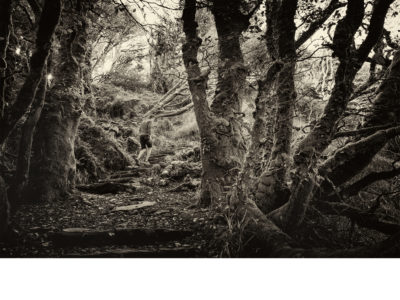 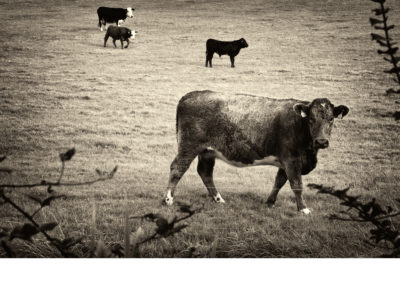 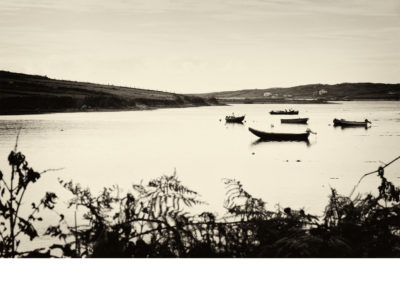 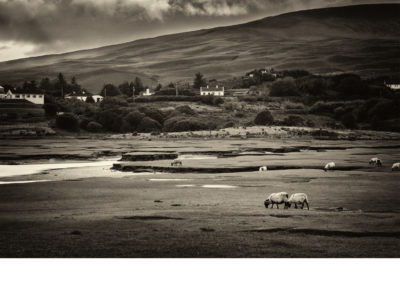 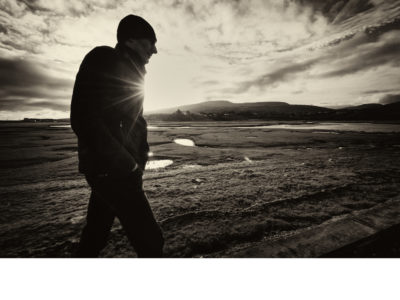 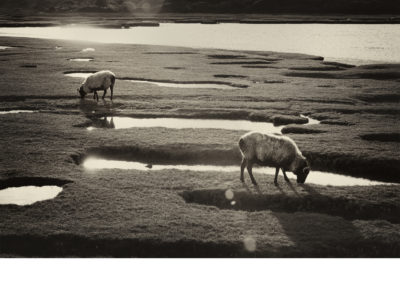 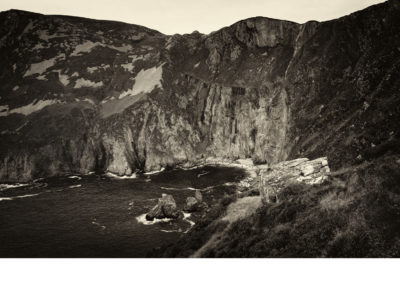 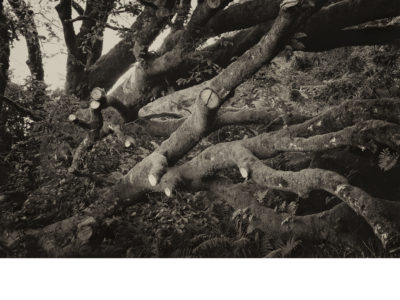 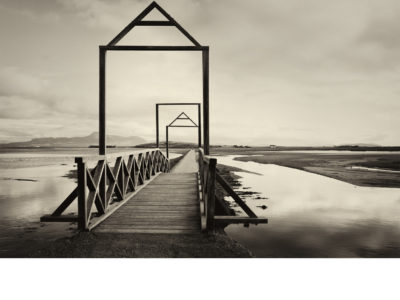 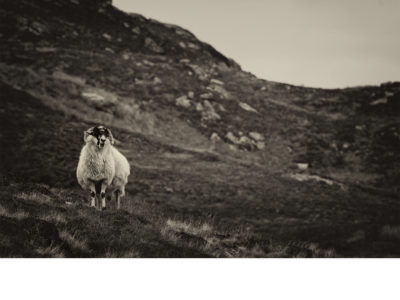 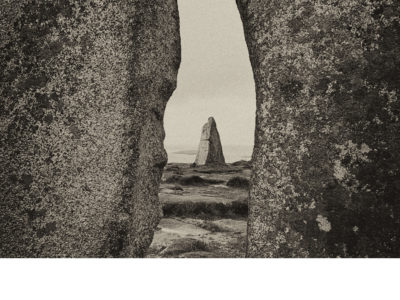